Deactivate or Reactivate a Member Record

Learn more about when and how to deactivate a member record. Also see how to reactivate a record.

A misconception we've heard before is when a member is dropped, or an individual under a specific company no longer works for that company, you should deactivate the record.

However, when you deactivate a record, you're essentially saying that this company or person will never be tied to the association in any way again, and that you have no need to see their audit history, transaction history, keep them in a group, etc. in the future.

In this article, we'll dive into what you should do in this scenario instead and when deactivating a record is most useful.

When To Deactivate A Record

Deactivating a record removes it from your main members list. These records are not counted in any current member, expired member, inheriting member, non-member, etc. counts on the website. You can still find the record by going to the Members list > Filter > Active in QuickBooks Online > Inactive, but these records do not retain a member type, do not appear in groups and therefore cannot be synced to MailChimp/Constant Contact, and do not appear anywhere else on the website.

Truly the only time a record should be deactivated is when:

If your scenario does not fall into one of those three scenarios, please see the scenarios below.

Scenarios To NOT Deactivate A Record

If a member is being dropped due to non-renewal/non-payment...

If this is the case, you'll simply want to perform a Non-Renew and Credit for the dues invoice to drop the member.

A Non-Renew and Credit will automatically change the member's expiration date to be in the previous year, so that they are automatically labeled as Expired. No need to do anything else unless the member falls into one of the reasons to deactivate above.

If an individual no longer works for a certain company...

In this scenario, you'll simply need to replace the Parent Company on the record's Details tab rather than creating a brand new record for them.

If the person inherits their membership from their company, the membership benefits will automatically be transferred as coming from the new company.

The benefit of this is that the person's transaction history, event attendance history, and profile information travels with them no matter which company they are with.

If the record is just a non-member...

Sometimes admins think of non-member records in their system as "clutter" or unnecessary data and deactivate these records, but you may want to think twice about that! Non-member records definitely serve their own purpose.

Let's say that John Smith creates a non-member user account and registers for an event. Instead of checking out as a guest, he chose to create an account and give you his information.

Now, because he has a record, you can add him to a Group and sync his email to MailChimp or Constant Contact, which can result in him coming to more events and eventually signing himself or his company up as a member.

How To Deactivate A Record

To deactivate a record in your database, follow these simple steps: 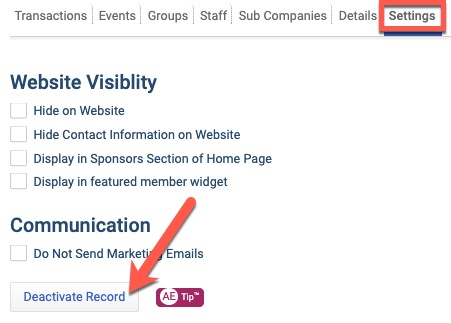 What Happens When a Record is Deactivated?

If you are getting ready to deactivate a record in Novi, please be aware that by deactivating a record, it will result in the following:

The record is visibly removed from the Novi database.

The record is removed from the QuickBooks customer database.

Any associated sub-company/staff records are deactivated.

Record is removed from all Custom Reports & Groups.

The record is updated to have a non-member status.

How to Reactivate a Record

Do you have some records that have already been deactivated? Never fear. If you've deactivated records that should have been handled in one of the other ways above, simply: 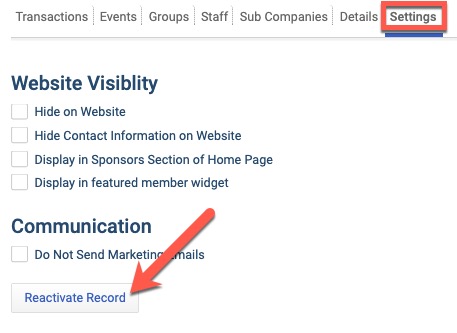