For Calendar Renewals: Give members a smoother process when they join near the end of the year.

After a specific date near the end of the membership year, many calendar-year associations begin giving new members who join an expiration date in the following year. This prevents a scenario where someone joins today for the remainder of the year, and then receives a renewal for next year tomorrow.

You can accomplish this by using the Multi-Year Initial Term setting, which can be found on each member type's Renewal tab.

What is a Multi-Year Initial Term?

Associations use multi-year initial terms to answer the question "Why would I sign up for the last couple of months of this year when I can wait a few months to sign up next year?

When setting up a multi-year initial term, you'll need to answer the following questions:

Example A - Charge dues for both years:

Let's say that your members expire on 12/31. Beginning 10/1, you want new signups to expire in the following year. You also want to bill them for the remainder of this year plus all of next year. Your settings would look like this: 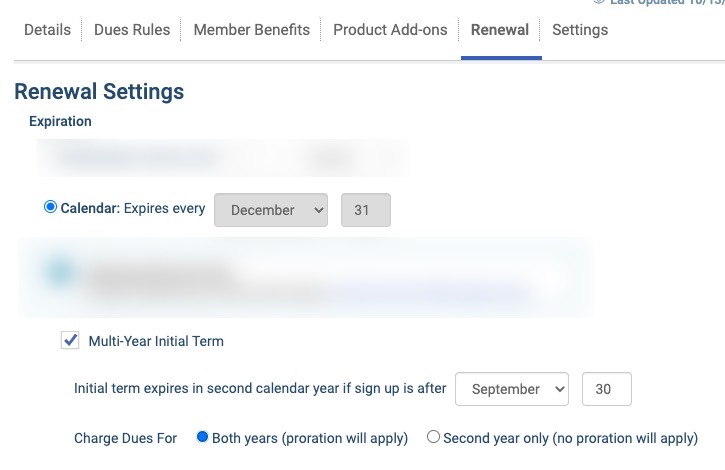 Example B - Charge dues for next year only:

Let's say that your members expire on 12/31. Beginning 10/1, you want new signups to expire in the following year. You only want to bill them for next year and they can have the remainder of this year for free. Your settings would look like this instead:

Where can I view and edit the Multi-Year Initial Term setting?

The Multi-Year Initial Term setting can be found on the Renewal tab of each member type, but only if the Expiration setting is Calendar. Anniversary renewals will not have a setting for multi-year initial terms since all terms will be the same length.

Once you've checked the box to turn on the Multi-Year Initial Term, you can enter the date and whether the system should charge dues for "both years" or "second year only".

Note: The date you enter should be the day before it takes effect. For example, in the screenshot below we entered September 30 so it will start on October 1. 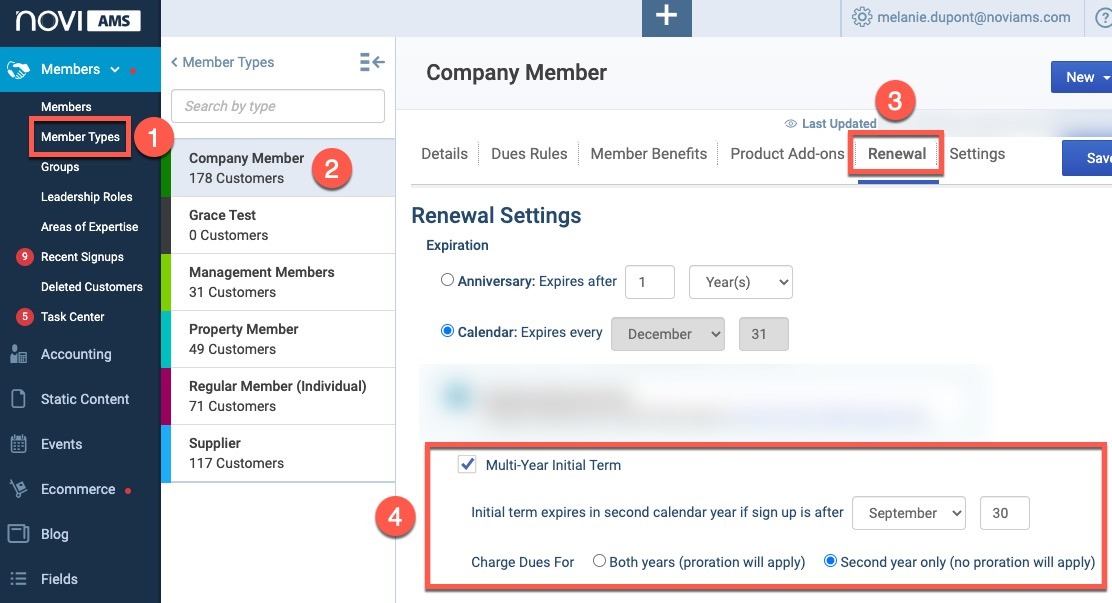 What happens if this setting is not turned on?

If you aren't using the multi-year initial term setting, and you have Auto-Renewal turned on, you might run into a bit of confusion surrounding late-year signups.

Let's again say that your members expire 12/31. Let's also say that the member type is set to auto-renew 90 days prior to expiration, on 10/2.

Before we dive into an example, it's important to note that your members will renew on 10/2, but Novi will also check for any members who were scheduled to renew within a 30-day period of 10/2, just in case they didn't renew for some reason. This "auto-renewal window" catches any failed renewals.

Now, let's say that ABC Company joins as a new member on 10/15. A few things will happen if Multi-Year Initial Term is not turned on:

As you can see, not using this setting breaks the registration process during this time period into two parts and creates two separate transactions.

It also does not allow for you to forgo the remainder of the current year's dues, if that is something you want to do. On the other hand, using the setting will allow that and will also be a better experience for your new member.

If ABC Company joined even later in the year, like 12/5, they would fall outside of the system's 30-day check (described above), which means they would not auto-renew and their membership benefits would stop on 12/31 of the current year. In this case, an admin would need to manually renew the member.

To best streamline this process (for everyone involved!), we recommend turning on Multi-Year Initial Term in the member type settings.